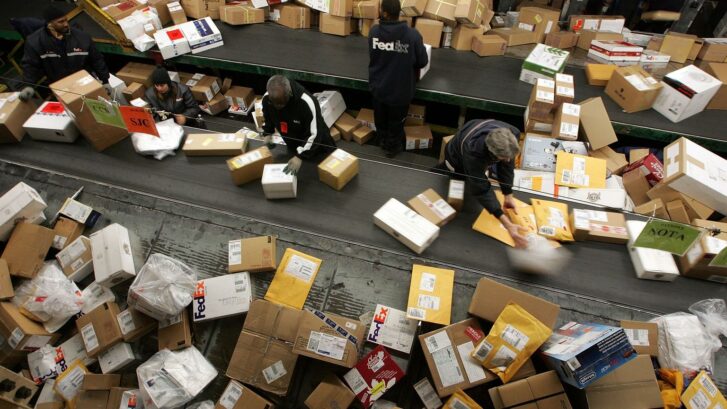 FedEx to hike rates by 6.9% ‘given the inflationary backdrop’

• FedEx will levy a general rate increase averaging 6.9% for its Express, Ground and Home Delivery services starting Jan. 2, 2023, the company announced Thursday. The move follows a rocky quarter in which FedEx saw a decline in package volume.
• The rate increase is larger than previous iterations — FedEx upped rates by an average of 4.9% in 2021 and 5.9% this year. The company also outlined higher Express and Ground surcharges for residential deliveries, oversize packages and packages requiring additional handling.
• FedEx believes the 2023 increase is appropriate “given the inflationary backdrop” and its pressures on the company’s costs this year, EVP and Chief Customer Officer Brie Carere said in an earnings call Thursday.

Dive Insight:
FedEx’s net income fell 21% YoY as a slowdown in manufacturing, global trade and consumer spending in the quarter led to lower-than-expected package volumes, according to Carere.

But the delivery giant’s struggles aren’t likely to garner much sympathy from shippers, who have been dealing with elevated shipping costs, pricier surcharges and capacity constraints throughout the COVID-19 pandemic. The 2023 rate increase will introduce further strain to cost-weary customers.

“To ease the blow, shippers need to think like the carrier thinks, and ship like they want them to ship,” Caleb Nelson, chief growth officer at logistics software provider Sifted, said in an email. “They’re really punishing long distance shippers, for example…Whether it’s zone skipping or considering a new distribution center, shippers should do anything they can to maximize in-region fulfillment.”

Adding to shippers’ woes, UPS is “extremely likely” to mirror FedEx’s 6.9% general rate increase, Nelson said. UPS hasn’t yet announced a 2023 rate increase, but the two rivals have historically moved in lockstep on rate increases. UPS “probably doesn’t want” a flood of FedEx clients drawn in by lower rates as it would challenge the company’s network, Nelson added.

FedEx’s actions to strengthen its bottom line after a difficult quarter extend beyond rate increases.

The company is rolling out a plan to save up to $2.7 billion in costs in fiscal year 2023, which began in June. A key piece of this initiative is reducing air cargo flight activity at FedEx Express, said FedEx President and CEO Raj Subramaniam. This includes cutting 11% of transpacific daily frequencies, 9% of transatlantic daily frequencies and 17% of daily frequencies between Asia and Europe.

“What that does for us is, as volumes fell down below expectations, that leads to inefficient linehaul, because load factor is down,” Lenz said. “Thus, you are running more linehaul than you need for the volume you have. So by consolidating sorts and rationalizing facilities, that’s just an example of how we can optimize against the lower volume.”

The company is taking these cost-cutting actions based on the assumption that the weak demand it experienced in late August will persist for the remainder of the year, Lenz said.

“Rest assured, we are going to be continuing to focus on the things we can control, and if we need to make further adjustments and reductions in the cost structure, we will move quickly and decisively,” he said.

Still, the two ports hit similar notes in their press releases, instead emphasizing the record year-to-date volumes they had handled and noting bottlenecks at the ports complex were beginning to ease.

“We’re making great strides in reducing the number of ships queuing to enter the San Pedro Bay ports complex and quickly moving imports and empty containers out of the terminals,” said Port of Long Beach Executive Director Mario Cordero in a statement.